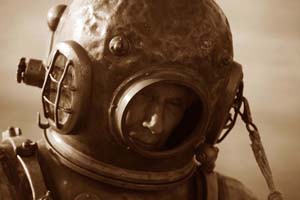 ©www.divingimages.co.uk
Ray Ives, 75 has been scouring the seabed for anything which glittered - even gold- his whole life. His extraordinary collection of dive gear and treasures salvaged across his lifetime has now become the subject for a new film.

The documentary, which has just been released, was directed by Devon film-maker Amanda Bluglass - a former BBC journalist. She was contacted by Dylan Kalis, Managing Director of Yacht Havens Quay in Plymouth who told her about Ray's 'museum' of marine salvage, kept in a shipping container at the marina.

The result is a stunning, cinematic 14 minute documentary which explores Ray's vast collection of finds, including cannons, portholes, swords, and even gold and silver. He has over 15 dive helmets which chart the course of dive technology over the last century.

The film was shot in HD in and around Plymouth Sound by Danny Cooke from Torquay, whose filming has already won international acclaim. It also features beautiful underwater photography by dive cameraman Neil Hope and aerial shots by Liskeard helicopter company, Castle Air.

See the documentary in the VIDEO section.