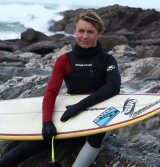 A 15-year-old schoolboy has become the youngest surfer to ride the Cribbar which this weekend reached an astonishing 10 metres in height. http://www.westernmorningnews.co.uk/15-year-old-youngest-surfer-ride-Cribbar/story-28594464-detail/story.html

A Devon man who may lay claim to the title of Britain's oldest active diver has reached the milestone of half a century working as a commercial diver... at the ripe old age of 80. http://www.yachthavens.com/yacht-haven-quay-plymouth/news-and-events/octogenarian-diver-from-plymouth-celebrates-50-years-underwater/#.VqX0J_H8ct4 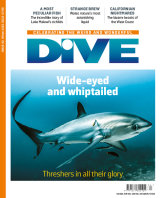 It has never been easier to film underwater. Neil Hope looks at the latest solutions and presents a round-up of the kit needed to take your video to the next level. Plus some handy tips and techniques http://divemagazine.co.uk/go/7266-dive-december-issue-preview 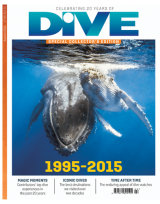 After a four-year gap as a digital-only publication DIVE Magazine returns to the newsstands with a 20th anniversary edition.... http://divemagazine.co.uk/go/7189-our-anniversary-edition-is-here

"I loved diving. I love to dive again, and I will dive every day if I had the time. That's all I have done for over 45 years, and I couldn't do anything else anyway ... except maybe work in a brothel ! "At 77 years, Ray Ives has not lost his sense of humor, or its frogman talents. He puts his weekly diver suit for diving with friends.

Born in Plymouth, this indefatigable diver still lives there today. Throughout his long career, he raked the seabed to extract treasures. He has just opened to the public its "museum", a simple container which is a cave like the one of Alibaba's where he exhibited his fabulous finds: swords , pistols, guns, bottles, gold and silver coins, utensils and marine antiques of all kinds.
Ray had mainly collected, preserved and enhanced objects that tell the great history of scuba diving. After his weapons of diver in the English navy in the 1950s and 1960s, he continued his diving career in the civilian for oil companies, and even participated in the adventure of diving "deep" in North Sea, during the great oil discoveries of the 1970s.

Ray is now retired, but idleness is not his cup of tea. He himself visited the museum, dives regularly to feed his collection and sometimes supervises professional dives. http://www.cargoculte.fr/en/our-realizations/140/ray-ives

Plymouth City Council and the National Marine Aquarium are joining forces to tackle the issue of loan sharks in the city with the launch of its loan shark awareness campaign alongside the National Illegal Money Lending Team. The ‘Say No to Fishy Finance’ campaign aims to warn local people of the dangers of using loan sharks and being made aware of the alternatives. The local initiative is also being backed by the national Illegal Money Lending Team. http://plymouthnewsroom.co.uk/say-no-to-loan-sharks-and-fishy-finance-in-plymouth/

A Devon scuba diver has acquired an unusual swimming partner in the form of 18-month-old penguin Yoyo. Dive supervisor at Torquay’s Living Coasts, Derek Youd, has known Yoyo since the penguin took its first swim at just three months old. Over the last year, the pair have formed a close friendship as Mr Youd has helped to run the zoo’s “penguin dive experience”, and he now considers Yoyo to be one of team. http://www.westernmorningnews.co.uk/Meet-Yoyo-penguin-new-diving-instructor/story-24933134-detail/story.html

The diver who really did p-p-pick up a penguin: Adorable seabird Yoyo refuses to leave keeper's side during scuba lessons. Yoyo, the macaroni penguin lives at an aquarium in Torquay, Devon where scuba divers can enjoy diving with penguins in their enclosure. http://www.dailymail.co.uk/news/article-2854540/The-diver-really-did-p-p-pick-penguin-Adorable-seabird-Yoyo-refuses-leave-keeper-s-scuba-lessons.html#comments

In the wild, they swim with their mothers instinctively, apparently relying on her to keep them afloat until they build up confidence.

But this yet-to-be-named baby seal is growing up without her mother, at a zoo.

They were separated because the mum was unable to produce milk, leaving keepers to hand-rear her pup by bottle-feeding her fish milkshakes.

She’s thriving – but when it came to water, this South American fur seal wasn’t quite sure what to do.

Zookeepers at a popular Devon tourist attraction are providing swimming lessons for a tiny seal pup.

The 10-week-old South American seal pup, hand reared by keepers when her mother was unable to produce milk, has dipped her toes - or in this case her flippers – into the water for the first time at Torquay’s Living Coasts Zoo & Aquarium.

THE TELEGRAPH: ANIMAL PHOTOS OF THE WEEK

Will Hood ]swims up to a giant barrel jellyfish just a few metres off St Michael's Mount in Cornwall. Normally found in deeper waters, underwater photography specialist Charles Hood reported a swarm of the mammoth Rhizostoma octopus spread over an eight-mile square area off the Cornish coast. Thankfully, the super-sized jellyfish's stings are of no significant threat to humans. http://www.telegraph.co.uk/news/picturegalleries/earth/10975826/Animal-photos-of-the-week.html?frame=2975386

DAILY EXPRESS: Diver gets up close and personal with Britain's biggest jellyfish

Horror in the deep! It could be a scene from an undersea horror film as this diver comes face to face with Britain's biggest jellyfish. http://www.express.co.uk/news/nature/489005/Diver-meets-giant-jellyfish

They normally inhabit the deep waters far off our coast, but thanks to our warm weather huge barrel jellyfish, weighing up to 35kg, have been spotted just off the beaches of Cornwall.

Attracted by plentiful plankton the creatures have ventured closer to shore as they feed and reproduce in vast numbers, forming dense groups known as blooms.

Scuba diving photographer Charles Hood captured this creature with his 6’3' tall son Will, just off St Michael’s Mount, Penzance, Mr Hood was stunned to find a massive group of barrel jellyfish spread out over an area of eight square miles towards Lands End. http://www.dailymail.co.uk/news/article-2693626/Invasion-giant-jellyfish-Scubadiver-encounters-huge-barrel-species-coast-Cornwall.html

Creatures which are "very important" for local fisheries could be disturbed if plans to excavate an area of seabed go ahead. http://www.bbc.co.uk/news/uk-england-cornwall-24653547

Inside Out South West follows diver Danny Daniels' quest to identify the remains of a World War II warplane. http://www.bbc.co.uk/news/uk-england-24143235

Diving into the past: Doomed Second World War RAF bomber discovered off the Cornish coast.. 70 years after it crash-landed while taking servicemen to Gibraltar for Christmas break
Flight W3998 crashed during take-off in December 1941 - killing eleven RAF airmen and leaving only four survivors
Aircraft, which had been missing for seven decades, was discovered in the sea off Plymouth Sound, Devon, by professional diver Danny Daniels http://www.dailymail.co.uk/news/article-2429243/Diving-past-Doomed-Second-World-War-RAF-bomber-discovered-the-sea--70-years-crashed.html

The forgotten logbook of a former Royal Navy diver has revealed a fascinating insight into attempts to raise a unique World War One submarine that sank over eighty years ago as the result of a tragic accident. The faded and yellowing 12” x 7” diary was rediscovered by the family of Plymouth-born Albert ‘Bob’ Smale who participated in a year-long salvage operation to raise the world's very first underwater aircraft carrier, HMS M2. http://www.dailymail.co.uk/news/article-2336422/Royal-Navy-divers-logbook-offers-fascinating-insight-life-World-War-One-submarine-sank-door-wasnt-closed-properly.html

A Somerset diving group has bought a new boat thanks to the thousands of breakfasts they served up at Glastonbury Festival this year.

The forgotten logbook of former Royal Navy diver Albert 'Bob' Smale and his part in the attempted salvage of the submarine HMS M2. http://www.westernmorningnews.co.uk/Forgotten-logbook-reveals-bid-raise-WWII/story-19248878-detail/story.html

D-Day for the Dartmoor pony!
Coastguards, RSPCA and a small army of Marines complete rescue operation for pony who slithered 230ft down a cliff in Cornwall. http://www.dailymail.co.uk/news/article-2287098/D-Day-Dartmoor-pony-Coastguards-RSPCA-small-army-Marines--save-animal-wandered-cliff-.html?ito=feeds-newsxml 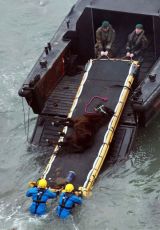 Diver's half century as an instructor

A Plymouth-based grandfather-of-six, has just been awarded a certificate to recognise his 50 years as a naval diver and instructor. http://www.divemagazine.co.uk/news/latest-news/6063-50-years-as-a-navy-diver

A designer and inventor from the southwest of England claims to have found a solution to the age-old puzzle of perpetual motion and is now poised to go public with his scientific breakthrough.
See the link for full story. http://www.dailymail.co.uk/sciencetech/article-2247063/Perpetual-motion-submarine-car-Inventor-creates-amphibious-vehicle-powered-self-sustaining-energy.html

A group of amateur treasure-hunters who discovered the remains of a historic 18th century Dutch merchant vessel lost off the Devon coast during a violent storm in 1721, have uncovered a second wreck - incredibly on the very same spot. http://www.divemagazine.co.uk/news/latest-news/6025-canon-found

More of Molly the submarine-loving dog...

The Metro report on eight year old West Highland terrier Molly as she takes a trip on the maiden voyage of her owner's £750,000 submarine. http://www.metro.co.uk/weird/916947-molly-the-terrier-lives-in-a-yellow-submarine

I was recently on safety diver duties with Diving & Marine Solutions for the BBC's Top Gear 50 Years of Bond Cars special. Click on the link to see the custom-built Lotus in action underwater. http://www.bbc.co.uk/iplayer/episode/b01nqc6f/Top_Gear_50_Years_of_Bond_Cars_A_Top_Gear_Special/

A new book by diver Howard Jones 'Blind Faith' uncovers what is believed to be a 300 year-old Dutch merchant vessel and its connection to an ancient type of Japanese Samurai sword. http://www.thisisdevon.co.uk/18th-century-wreck-gives-secrets/story-17199894-detail/story.html

Divers from Chiltern Sub-Aqua Club embrace the new BS-AC campaign to remove litter and debris during a visit to Plymouth. http://www.divemagazine.co.uk/news/latest-news/5892-diving-cleaning-up

Volunteer divers from Bude Divers BS-AC assisted a release of 12-week old juvenile lobsters as part of a scheme pioneered by the National Lobster Hatchery,. http://www.thisisplymouth.co.uk/VIDEO-Divers-help-release-baby-lobsters-sea/story-16477582-detail/story.html

A team of scuba divers from Cornwall will be releasing hundreds of baby lobsters into the sea as part of a major marine conservation project. http://www.sportdiver.co.uk/News/Latest-News/Divers-to-help-release-baby-lobsters-into-wild

Veteran commercial diver Ray Ives is the subject of a new documentary focusing on his collection of underwater finds collected over th epast five decades. http://www.thisisplymouth.co.uk/Film-charts-Ray-s-dive-treasures/story-13267760-detail/story.html

The largest private motor yacht ever to have been constructed in Britain has sailed from Plymouth on course to its new owners.
The spectacular six-deck 'Vava II' left the city on course for the island of St Martin in the Caribbean. http://www.thisisdevon.co.uk/100m-superyacht-Vava-II-sets-sail-secret/story-15384156-detail/story.html

Everyone knows yachts don't come cheaply but Britain’s richest woman may have set a new benchmark in floating status symbols with a new boat that costs £250,000 just to fill up with fuel. http://www.metro.co.uk/news/892123-100m-yacht-belonging-to-uks-richest-woman-is-largest-ever-civilian-boat

Cornelia the stone bass arrives at the NMA

The NMA's Atlantic Reef display suffered the catastrophic loss of over 200 fish when an overnight storm caused a power failure at the Plymouth-based attraction http://www.sportdiver.co.uk/News/Latest-News/Aquarian-power-cut-kills-hundreds-of-fish

Review of a new and innovative dive computer from Uemis http://www.sportdiver.co.uk/News/Kit-Reviews/Uemis-Zurich-SDA-computer-review

Feature on shorediving in Mevagissey - with accompanying video on the News page. http://www.divemagazine.co.uk/news/article.asp?uan=5425

Sharks on a plane

The Sun's coverage of the National Marine Aquarium's trip to Ocean Park, Barbados to return with the UK's largest cargo of marine exhibits. http://www.thesun.co.uk/sol/homepage/news/2650192/Sharks-on-a-plane.html

Brave youngster Lydia Cross, who lost both legs to the disease meningitis, to raise funds for 'Help for Heroes' meets with Olympic diver Tom Daley for a training session. http://www.thesun.co.uk/sol/homepage/news/campaigns/our_boys/2434246/Olympic-Tom-aids-brave-Lydias-heroes-swim.html

Eight year old Lydia Cross who lost both legs to the disease meningitis takes a swimming lesson with Olympic diver Tom Daley prior to her £12,000 fund-raising charity swim in aid of Help for Heroes. http://www.thisiswesternmorningnews.co.uk/wmnvideos.html?id=44968

The members of Plymouth Sound BS-AC remove an illegal net from a popular diving site off Plymouth Hoe - Follow the link for video footage and slideshow. http://www.thisiswesternmorningnews.co.uk/news/Divers-remove-dangerous-illegal-net/article-942482-detail/article.html

Stepping back in time to the pioneering days of Standard Diving with the Sal Diving Company at Mevagissey, Cornwall.
Follow the link for video footage and slideshow. http://www.thisiswesternmorningnews.co.uk/news/Classic-diving-look-lives-day/article-938242-detail/article.html

Members of Plymouth Sound BS-AC give the lowdown on their top ten dive sites... http://www.DIVEmagazine.co.uk/news/article.asp?uan=4803

While Cornish diving is renowned among Brit divers, few have ventured across the Channel to enjoy the similar diving found in Brittany. Neil Hope joins a trip on the liveaboard that pioneered diving in this wild corner of Atlantic France http://www.divemagazine.co.uk/news/article.asp?uan=4531

Marine wildlife, Ocean & Coastal cruises by RIB around the spectacular Land’s End and Lizard Peninsulas with the opportunity to see Whales , Dolphins, Seals, Basking Sharks, and a diverse range of Seabirds. http://www.elementaltours.co.uk/

Diving with the resident grey seal colony on the Farne Islands, Northumberland http://www.scotsac.com/Scottish_Diver/SD_0112/200112_Farne1.htm

The highest recorded sightings of basking sharks off the coast of Cornwall. http://www.thesun.co.uk/sol/homepage/news/article268214.ece

The rare are and venomous jellyfish capable of joining together and forming lines stretching more than 30 metres. http://www.dailymail.co.uk/pages/live/articles/news/news.html?in_article_id=492430&in_page_id=1770

The grey seals of Lundy Island. www.camerasunderwater.info/articles/general/Lundy_Seals/index.html
Next
Previous