This is the moment when 15-year-old Kamron Matthews became the youngest-ever surfer to ride the world-famous Cornish Cribbar wave. 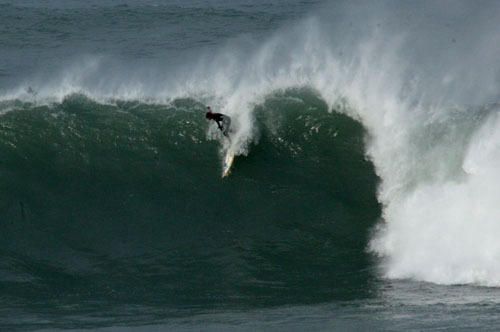 © www.divingimages.co.uk
This is the moment when 15-year-old Kamron Matthews became the youngest-ever surfer to ride the world-famous Cornish Cribbar wave.

The teenager, from Newquay, Cornwall – who has been surfing since the age of two – paddled out the half-mile distance as part of a group of experienced surfers as spectators looked on from the nearby headland.

“It's been my ambition to to surf the Cribbar since the age of ten.” Kamron explained after his exhilarating and record-breaking experience, “ and to be able to get to do it today was really good.”

“I caught about four decent waves but got wiped out on one and I got sucked back down into the wave as well – I put myself in some stupid situations so my mum was probably worried but it was good fun though.”

First surfed in 1966, the Cribbar – named after a rocky shelf beneath the surface of the water - has since gained a worldwide reputation as a 'big wave' – one of the few in UK waters.

The rare phenomenon which occurs off Towan Head, Newquay, Cornwall, happens just a few times a year when weather and tides come together to create massive and spectacular waves in excess of twenty feet high.

“It took me around two years of training for this - getting fit, building up my arm strength and being able to hold my breath for as long as possible.”

With mother Gina anxiously observing from the clifftop, the youngster made a series of rides over his three and a half hour stint in the water – including a spectacular nose dive into the water.

“ I must admit I didn't sleep very much last night with worry but he's 15 now and it's what he wanted to do.

“He spends every single day on the beach so he's got a lot of experience and he got some help and tips today.”

“He's been talking a long time about surfing the Cribbar and did want to be the youngest to do it and he's done it now and I'm really proud of him.”
Chasing the Sublime short film
DIVE Magazine Winter 2015/16 now on sale
Next
Previous