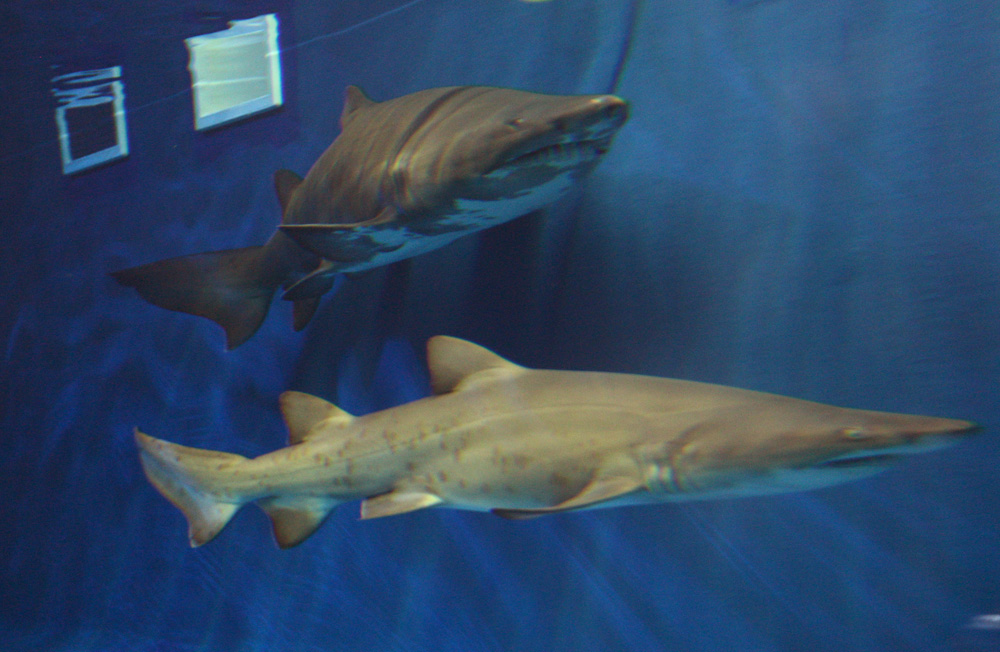 The National Marine Aquarium has welcomed two very special Sharks to its family, with the arrival of the first captive bred Sand Tiger Sharks in the Northern Hemisphere.

Travelling from South Africa, where they are known as Ragged Toothed Sharks - one female, called uShaka and one male, called Mandela - were born at the uShaka Seaworld, Durban, in March 2013 and December 2014 respectively. With almost two years on her brother, uShaka is the largest of the pair measuring in at 2.0 metres, while Mandela is currently 1.6 metres. As they mature, the Sand Tiger Sharks could grow to be up to 3 metres in length.

Currently in quarantine following their travels from South Africa, the new Sand Tiger Sharks will be released into the Atlantic Ocean Tank in the coming weeks. Where they will have their own private area at the back of the exhibit to allow them to settle before joining fellow Sand Tiger Shark residents, Howard and Enzo, as well as the likes of Eagle Rays, Nurse Sharks, Tarpon, Barracuda and Southern Stingrays.

Captive breeding enables Zoos and Aquariums to maintain healthy populations of captive animals and marine life. Keeping data on the captive species enables selective breeding of those with the strongest genes, thus creating the strongest captive population of the species. There are numerous Studbook and Monitoring programmes that exist for terrestrial and marine species in Europe and around the world, to enable better care and breeding programmes.

"The monitoring programme will help to ensure the healthiest Sand Tiger Sharks located in Aquariums across Europe are used for future breeding projects. By sharing data, we can be confident Sand Tiger Sharks bred and born in captivity will have the strongest chance of survival and possess the best genes available in the captive Shark pool.

"We hope our visitors look forward to seeing our new Sand Tiger Shark duo at the Aquarium soon."