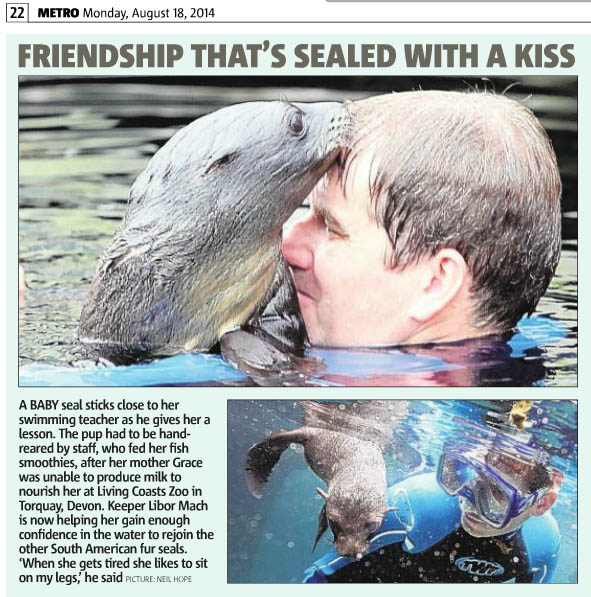 It's been a busy last month or so at Diving Images.

I enjoyed a trip out to the wreck of The Coronation - a 320 year old English 90 gun warship - that came to grief off Rame Head, Cornwall with Mark Pearce of The Coronation Wreck Project. It was fascinating to see how the storms of last winter had effectively excavated large sections of the reamins and uncovered many new finds on the protected site.
Secondly we had some incredible barrel jellyfish images supplied by DI regular contributor Charles Hood. The pictures, showing Charles' son Will alongside one of these immense creatures graced the pages of many of the national newspapers the following day, including The Sun, Telegraph, Daily Mail and Daily Express.
Next was the unique opportunity to film and photograph one of the first 'swimming lessons' of a 10 week-old South American fur seal pup at Torquay's Living Coasts Zoo. The young female is being hand reared by keepers at the zoo after her mother was unfortunately unable to produce milk to feed her. Having completed her time in quarantine and steadily increasing her weight thanks to a diet of 'fish smoothies,' the youngster's surrogate mother - Senior Keeper Libor Mach - is now taking an hour-long daily dip with her until she's confident enough to fend for herself. Thank you to the Daily Express, Metro and Western Morning News for some nice coverage and to BBC Spotlight for their use of Diving Images underwater footage.

See more details in the Links section and images in the Galleries.

If you have an interesting diving or underwater-related story/images that you think may be newsworthy drop me a line at neil.hope@talktalk.net.
Simply Business online video
The Mighty Mo - Diving SW Florida's Mohawk wreck
Next
Previous