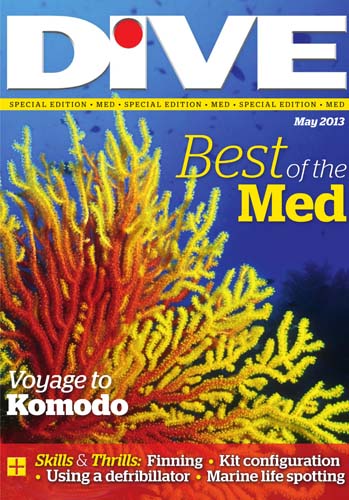 In the May issue of DIVE magazine we have selected a few of our favourite features on the Mediterranean sea, added a dash of scuba skills and mixed in a fantastic treasure island feature on Komodo. There is something for every diver so let's take a look through the feature list:

MALTA
Blue water, shipwrecks and affordability put Malta and its neighbouring islands among the strongest of Red Sea alternatives. And now, a forward-thinking government has put diving at the top of the agenda

CROATIA: Under Wraps
Croatia is home to a comprehensive array of dive sites, including wrecks dating from 200AD to the Second World War. Neil Hope tours the key sites of the Dalmation Coast, including one of the world's best-preserved amphora sites

IBIZA: The Big Don
The sinking of the Don Pedro container ship off Ibiza and it's subsequent clean-up has created a monster wreck dive to rival the best in the world. DIVE shows you round this huge diving attraction PLUS other Ibiza signature dives

CYPRUS: Belly of the Beast
The Zenobia in Cyprus may be one of the world's most famous wrecks, but it hasn't given up all its secrets. Technical diver Neil Black tells the story of a series of complex dives carried out over 30 months. in which he braved blockages, toxic hazards and a viz-killing red mist to fight his way into an unexplored section of the wreck

FINNING CHALLENGE:
It's something that most divers do without thinking - but what's the most efficient and fastest method of finning? Jo Mattock and members of the New Cross BSAC find out

SHOCKING SKILLS:
DIVE's editor learns how to use an automatic external defibrillator. A skill that could save your buddies life. 'Clear!'

WHAT YOU LOOKING AT?
Don't know your sea squirts from your sponges? Think every fish looks like a cod? Seasearch's Observer course could be the thing for you. Jo Mattock learns to tell her wrasse from her elbow

KEEP IT SIMPLE:
It's easy to get weighed down by your kit as you become more proficient - the deeper you go, the more stuff you need to take with you. Charlotte Boan provides some tips for becoming more streamlined