A team of amateur treasure-hunters believe they have found the missing link between the remains of a Dutch merchant vessel wrecked off the south coast of England in 1721, and a rare Samurai sword forged over three centuries ago in Japan. 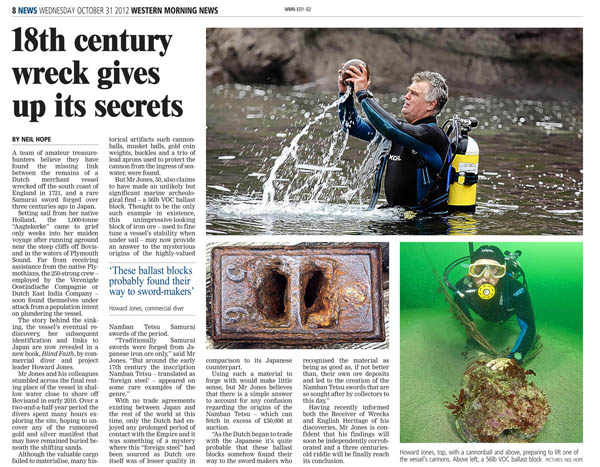 Cutting courtesy of the Western Morning News
Setting sail from her native Holland, the 1000 tonne Aagtekerke came to grief only weeks into her maiden voyage after running aground near the steep cliffs off Bovisand in the waters of Plymouth Sound.

Far from receiving assistance from the native Plymothians, the 250-strong crew – employed by the Verenigde Oostindische Compagnie or Dutch East India Company - soon found themselves under attack from a local population intent on plundering whatever treasures lay onboard.

The story behind the sinking, the vessel's eventual rediscovery, her subsequent identification and links to Japan are revealed in a new book 'Blind Faith' by commercial diver and project leader Howard Jones.

Jones, along with colleagues Ray Ives, Chris Bird and Mike Pellet stumbled across the final resting place of the vessel in shallow water close to shore off Bovisand in early 2010.

Over a two and a half year period the divers spent many laborious hours exploring the site while hoping to uncover any of the rumoured gold and silver manifest that may have remained buried beneath the shifting sands.

Although the Aagtekerke's valuable cargo failed to materialise, many historical artifacts including cannon, cannonballs, musket balls, gold coin weights, buckles and a trio of lead aprons - used to protect the cannon from the ingress of seawater - were recovered.

Now Jones, 50, claims to have made what could be one of the most unlikely but significant marine archeological finds of recent times - a 56lb VOC ballast block.

Thought to be the only such example in existence, this unimpressive-looking block of iron ore – used to fine tune a vessel's stability when under sail - may now provide an answer to the mystery origin of the highly-valued Namban Tetsu Samurai swords of the period.

"Traditionally Samurai swords were forged from Japanese iron ore only," explained Mr Jones, "but around the early 17th century the inscription Namban Tetsu - translated as 'foreign steel' - appeared on some rare examples of the genre."

With no trade agreements existing between Japan and the rest of the world at this time, only the Dutch had enjoyed any prolonged period of contact with the Empire and it was something of a mystery where this 'foreign steel' had been sourced as Dutch ore itself was of lesser quality in comparison to its Japanese counterpart.

Using such a material to forge with would make little sense, but Mr Jones believes that there is a simple answer to account for any confusion regarding the origins of the Namban Tetsu - which can today fetch in excess of £50,000 at auction.

"It was on the surface a strange decision to make, but my research indicates that both the cannon and ballast weights of the VOC line were most probably made from Swedish iron ore - which is of extremely high quality and therefore it would be a logical step to use such a metal."

“As the Dutch began to trade with the Japanese it's quite probable that these ballast blocks somehow found their way to the sword-makers who recognised the material as being as good as if not better than their own ore deposits and led to the creation of the Namban Tetsu swords that are so sought-after by collectors to this day.”

Having recently informed both the Receiver of Wrecks and English Heritage of his discoveries, Mr Jones is confident that his findings will soon be independently corroborated and a three centuries-old riddle will be finally reach its conclusion.
METRO coverage of Molly the submarine dog
GoPro3 Launch San Francisco
Next
Previous